* PTC management maintains terms of the agreement was grossly violated and impacted on PTC as a company, its employees, suppliers and Malawi as an economy

While Tafika Holdings Limited — owned by South Africa-based Malawian Arson Malola — maintains that the share purchase agreement (SPA) it has with Press Corporation Plc to buy People’s Trading Centre (PTC) concludes in the next few weeks, senior PTC management has asked Press Corporation to the terminate deal — saying the investor has grossly violated terms of the agreement. 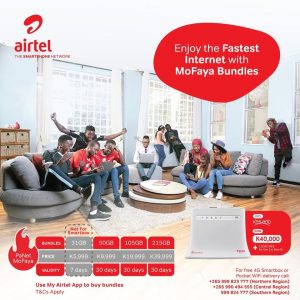 In a letter to PCL’s acting group chief executive officer, copied to Malola as Tafika Holdings executive chairman, says the violation impacted on PTC as a company, its employees, its suppliers and Malawi as an economy.

“Management of PTC makes this request with a heavy heart as we believe we are accountable for the 615 employees of PTC and more than 400 suppliers of various goods and services.”

The letter highlights that on April 7, 2021, PTC executive management — with input from the whole management of PTC — presented to the PTC Board of Directors the need to have a healthy balance sheet for the company to achieve a turnaround.

Management advised the Board that for PTC to achieve the desired turnaround, it needs a capital injection of around US$22 million and that the Board agreed with management proposals after being appraised that the processes were already in progress to find an equity investor. 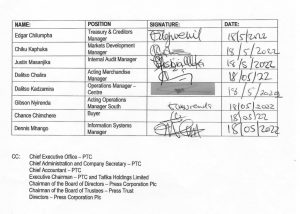 Signatures of the concerned management

The process, according to the concerned management, was being championed by current acting group CEO when he was occupying the office of general manager operations for Press Corporation Plc Group.

After a rigorous process, the CEO successfully identified an equity investor to champion the turnaround process identified as Tafika Holdings Limited and “both management and staff of PTC were very excited to note that at last, the company will be recapitalized to achieve the much needed turnaround and start competing in the Malawi retail space with adequate capital”.

The original required amount to clean up the balance sheet was US$22 million (K18.3 billion) but at the time of closing the deal, the required amount was revised to K18.5 billion with the investor offering K6 billion. 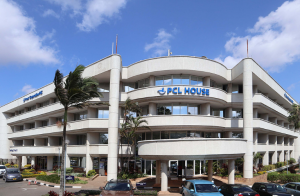 Press Corporation endeavored to inject the K12.5 billion shortfall by assumption of loans and other creditors to ensure that the full required injection for the business to turnaround was achieved and enable the new shareholder assume a business that has a clean balance sheet.

The senior management’s understanding of the PTC sale purchase agreement was that it was designed in a way to clean up the balance sheet, take out all loans and creditors as of February 28, 2022 and offer a new lease of life which was meant to achieve the original objective of the equity injection and balance sheet clean up as presented to the Board of Directors of April 7, 2021.

Total liabilities as at February 28, 2022 were K18.5 billion — that include d K10.9 billion loans with banks and other financial institutions; K1 billion rent arrears; K351 million pension arrears and K6.2 billion trade and other creditors.

The concerned management indicates that members of staff were particularly concerned about their pension and MASM arrears who were assured as well as suppliers that things will improve by end of April latest being mid-May 2022 when the investor deal would be concluded.

But as of May 16, 2022, Tafika Holdings is reported to have “failed to honour its commitment to pay the assured liabilities within 60 days” as per SPA and of particular concern is that the financial position of the company continues to deteriorate and the creditors continue to increase at the rate of around K300 million per month.

“Who is going to be liable to honour these liabilities if Tafika Holdings Ltd disappears?” asks the concerned management. “In the three months to May 31, 2022, we are already estimating a growth in creditors by around K1 billion. 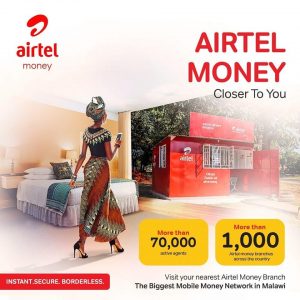 In view of that, the management indicate that Deloitte has advised that PTC is not a going concern and has a draft disclaimer opinion on the financial statements for the year December 31, 2021, in which the auditors effectively concluded that “Tafika Holdings does not have the financial resources, does not have financial capacity and is not capable of raising the K6 billion required to pay the creditors of PTC to enable it to continue operating as a going concern for the next 12 months from May 2022 to April 2023”.

It is indicated that Tafika Holdings has so far failed to pay the ESCOM arrears of K495 million which is part of the K6 billion purchase consideration that has prompted ESCOM to issue an advised that it will disconnect power at all post-paid PTC sites across the country on May 31, 2022.

Tafika Holdings is also reported to have failed to pay Rab Processors Limited K309 million that it committed to pay within 60 days of assuming the business and that has led Rab Processors to file in the High Court of Malawi to declare PTC insolvent and push for a forced liquidation of the company.

Tafika Holdings has also failed to pay the pension arrears of K351 million also part of the K6 billion purchase consideration which were also supposed to be paid within 60 days after the signing of the SPA in February — that has also led the Principal Officer of the PCL Pension Find to write to PTC management advising the seriousness of the matter.

The company’s staff are threatening to engage the Governor of the Reserve Bank, who is the Registrar of Financial Institutions, to take action on PTC as regards to the pension arrears.

Based on these, management says it has been forced to agree with PTC auditors, Deloitte that Tafika Holdings does not have the financial capacity to raise the K6 billion purchase consideration and “as such the fundamental condition for this sale has been breached and will not be remedied within any reasonable time”.

Thus the request to terminate the SPA while praying that if it is premature to do so, PCL must commit to honour all the liabilities that are accumulating by PTC resulting from operating at a loss due to lack of stocks as on a monthly basis, PTC “is accumulating around K300 million liabilities in terms of unpaid rent, staff expenses, unpaid electricity and various unpaid good and services that cannot be paid by the current gross profits”.

They also indicate that Tafika Holdings does not have any known physical address in Malawi in terms of office or assets and “as such, it cannot be held accountable for these liabilities if it decides to disappear”.

But Malola responded — not to the petition by PTC senior management— but as his reaction to what is circulating on social media, describing it as just “rumors [which] are without basis and are without merit”. 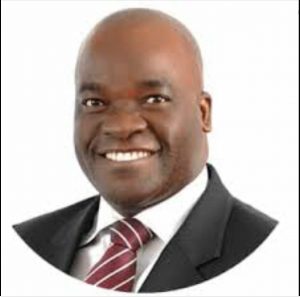 He indicates that the source of the story is from a journalist, who is quoting internal sources and “has not made any effort to contact Tafika Holdings Ltd directors to confirm the status of the transaction”.

He explains that the sale and purchase transaction was signed and finalised in March 2022 but is subject to regular approvals, which is a contrast to what the senior management indicates being done in February.

“Whilst Tafika Holdings Limited has taken over management of the business, the closing of the transaction will take place in the next weeks,” he wrote, emphasizing that “currently, the business is in transaction — hence the low stock levels. 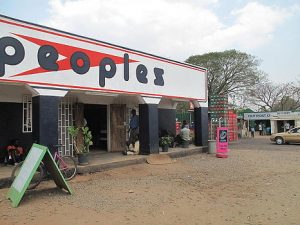 “However, Tafika Holdings is planning to commence and committed to stocking the stores in the next week or so. The delaying has mainly been caused by supply chain constraints currently experienced in the country and regionally.

“Whilst the company is undergoing the transition process, we request that all stakeholders to be patient and bear with us for the next few weeks [as] Tafika Holdings is committed to recapitalizing the business and champion the turnaround and implement the growth.”

The growth implementation, as according to Malola, “entails, amongst others, the expansion of the number of People’s Stores to not less that 200 stores in the next five years across Malawi, thereby creating employment”.

“PTC is one of the largest retail stores of consumer goods in Malawi and is the leading retailer of groceries operating 20 stores in Lilongwe, Blantyre and Zomba, with the majority of its stores in Blantyre.

“It operates under People’s, SPAR and Food Lover’s Markets under licwnce and franchise respectively,” said Malola in his statement. 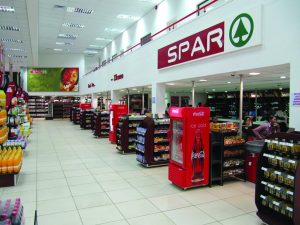 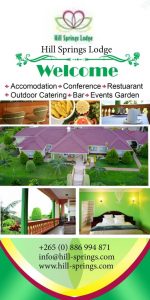